To begin with, a survey conducted a couple of months back concluded that over 56% of people across the US and Canada prefer crunchy peanut butter over creamy.

This, of course, brings us to two conclusions --

Considering all of that, the first point is a given. Surveys are sometimes (always) time consuming. There are either too many choices or hardly any. So people just don't put in the time and work harder. And that's a shame.

Or sometimes, people are just completely off the mark in every way possible.

EXHIBIT 'A': Guy who thinks he looks like Elvis Presley. 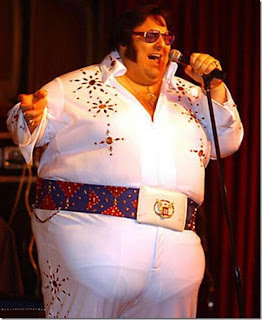 The second point, though, is of much greater concern. Peanut butter is/was/has been/will be/should be a part of almost everyone's lives. Unless you hate peanut butter. In which case, most people don't like you very much.

Consider beef jerky here, which quite rightly represents the kind of decision making finesse one needs to possess to skate by life without breaking a wheel. Consider this --

4. A little too much = You're Clint Eastwood and it's your birthday.

5. A lot of beef jerky = You're the 'guy who thinks he looks like Elvis Presley'.

With beef jerky, one walks on a thin rope. Peanut butter, is the Golden Gate Bridge.

But it sure is under appreciated (Unlike the Golden gate Bridge)
And this under appreciation highlights the ignorance of society towards something that has been a part of human endeavour since the dawn of modern civilisation. Sounds convincing enough? No?

Ok then, I am running out of irrelevant arguments and page space.

The point which I'm trying to make (yes, there is a point in there), is that opinions, no matter on how stupid a subject or however stupid on their own, do matter. And they should be held in good regard as well.
Apartheid started with an opinion, so did the struggle against it.
And voices, no matter how annoying, need to be heard.
Breaking your head over your preferred choice of peanut butter may not be so productive, but might spark a neutron or two in your brain that gets your geek on and sets you out on a roll.
Maybe that's too much. Maybe. But it's a good thing anyway.

Nonetheless, bad examples like that never kill an argument (they almost always do). And so do contradictory statements between parentheses.

In short, this is an opinion blog. What.
And I'm still not sure what that entirely means.
Well, in a way, at least. Hopefully it'll be more than just mere opinions, but we'll save that for another day.

In the meantime, if anyone wants to revisit this post, please Google "Best way to crash your first blog post".

Nevertheless, a first blog post should always have a good ending.

So here's a nice little poem to fiddle with your mind...

When I woke up this morning
the dawn was soft and still
A little robin came and sat
upon my window sill
He tipped his head and looked at me
his eyes so bright and clear
He chirped a little melody
My morning thoughts to cheer
His song he sang so sweetly
Without a moments lull
I gently closed the window
and crushed the sucker's skull.

Aayush Nema
Born at a very young age, I've always been intrigued and perplexed by the complexity and convoluted individualism of human evolution. And when I'm not using words I don't understand to describe things I don't understand, I love to write. I also love football, physics and everyone under the sun. Except Dora. Writing about social and current events has always been a hobby, and I see myself as someone who is driven enough to help people make a change in society. Yes, I'm a dreamer. And I have a dream that one day chickens will be able to cross roads without having their motives questioned. For the most part, this section might not give a mentally healthy description of myself. So read the posts.